Hippopotamus or shortly hippo is a huge herbivorous mammal commonly found in the Sub-Saharan Africa. The word “hippopotamus” is a Greek one which means “river horse.” Hippopotamus is the largest land mammal after elephant and rhinoceros. They have torsos that look like barrels, mouths that can be opened wide and a huge size which weighs about 1500 kg for males and 1300 kg for females.

Despite the fact that the hippos are big, long and sharp teeth, they are known to be herbivores as they feed on vegetables close to water. They eat different species of grasses which are their top source of food. A hippopotamus does not use its large canines for feeding; instead, it uses its lips to clip grasses and its cheek teeth to grin them up. At night, they follow paths that are marked by dung to come on the land and feed on grasses. Although they are very large in size, they use very little energy through floating in water and they eat 40 kg of food every night. Hippos are also known to encroach on human settlements and trample over things while consuming grains planted by humans.

They are found in the southern area of Africa within the Sahara desserts. History says that they used to exist in Asia and Europe in the past. Though they are commonly found in the Sub-Saharan Africa, their population is dwindling due to agriculture and loss of their habitat. Hippos are found in areas close to water and grasslands where they feed easily during the night. They also reside in wetlands where they graze on small islands by nightfall and wade through marshy water by day. A large number of hippopotamus is commonly found in lakes, slow moving waters and deep waters in eastern and southern countries of Africa while a minority of them is found in the west.

The hippopotamus is known to be one of the dreaded animals in Africa, as it is very ferocious in nature. They live in small herds with a number of 10-20 hippos and these only consist of females and their young ones. Their herds have a leader that is the most vicious of them all and capable of protecting them from invaders. The dominant male hippopotamus holds the right to mate with females for breeding. They can also allow other well behaved male hippopotamus enter their territories. If they are not well-behaved, it can lead to a brutal fight in the course of protecting their herds. The hippopotamus spends almost the entire day in water but at night it follows a specific path to the land to go and feed till the following morning when it returns back to its water habitat and resumes feeding on grasses surrounding water.

Large animals like lions, hyenas and crocodiles are their biggest predators. Although hippos are one of Africa’s biggest mammals, they are still preyed upon by these big vicious animals when they are weak, outnumbered or immature. Their existence is also threatened by humans who are encroaching on their habitats, and hunted them for their meat and teeth which are made of Ivory. A lot of hippopotamus have been killed for their teeth by hunters recently. Female hippos are known to congregate in herds to secure themselves and their young, which are mostly the targets of their most feared predators.

It is unusual for the female hippopotamus to breed on land, as they are commonly known to breed in water. The gestation period of the female hippopotamus lasts for 8 months and a single calf is born during the rainy season. The cub rides on it mother’s backs for safety and its mother strongly protects it. At 18 months from birth, the calves are fully weaned and leave their mother when they are 7-8 years old. They graze on their own when they leave for the land at night but stay with the herd when they are in the water. 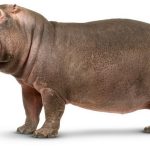 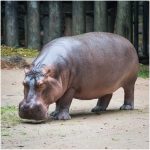 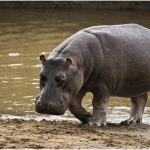 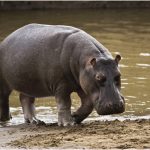 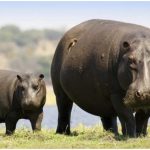 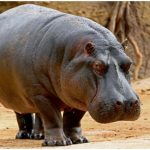 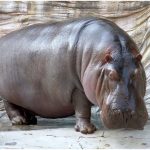 When the hippopotamus is immersed in water, it is able to see, breathe and hear while keeping cool in the hot sun. They have enormous jaws with two long canine teeth. They are enormous in size and weight.