Giant panda, also known as the giant panda bear, is a unique animal that we see almost every day on the National Geographic TV or in movies or perhaps we have seen it ourselves during a tour in China. They have big dark patches around the eyes and all across their round bodies. 99% of their diet includes bamboo and grass, and the rest contains rodents, small birds, honey, eggs, etc. They are found only in China and are now vulnerable to extinction due to human interruption in their natural habitats.

Giant pandas eat a lot of bamboo in the surrounding forests despite the fact they are classified as carnivores. They also eat grass, rodents and birds, and they drink a lot of water from mountain streams. They feed on different species of bamboo and also feed on different parts of plants at different times of the year. The giant panda uses its strong jaws to crush the bamboo till it becomes digestible. Each giant panda can eat more than 30kg of bamboo a day.

Humans have encroached into the habitats of Giant Pandas that used to live in the low lands of the river basins of Yangtze. Increased human settlements and activities have compelled them to live in remote areas high up the mountains. They live in high altitude coniferous forests in central and western China which contain a lot of bamboo. These forests are usually cold, moist and cloudy; thus making them dependent on a high intensity of rainfall. Their coloration makes them easily dwell in these habitats when searching for food. Deforestation by humans and encroaching into their natural habitats are causing a major threat to their existence.

Male giant pandas live in a territory which is twice the mass of a female panda. They meet only during the mating season. They are solitary animals that occupy territories marked with scent glands and secretions from scratch marks on trees. They spend half of the day eating bamboo and other parts of the tree to get the necessary nutrition. They consume bamboo which covers more than 40% of their body mass.

Giant pandas are known to be good tree climbers and they can also swim very well. They typically spend a lot of time eating bamboos and its supplements, and spend the rest of the time either climbing trees or swimming.

Unlike the large-sized adult giant pandas that are strong and have no predators, the cubs are vulnerable to predators like lions, leopards, and eagles until they are at least one year old. Humans who hunt for the fur of these animals also pose as one of their greatest threats. Giant pandas have been forced to live in isolated remote areas which have caused a severe decline in their population, as deforestation and hunting by humans have reduced their population. 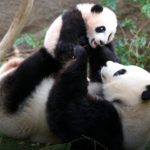 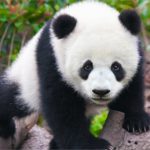 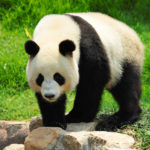 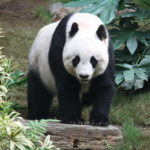 The female giant panda attracts a male by making a series of bleats and groans in order to breed between the months of March and May. A female giant panda gives birth to cubs after a 5-month gestation period. They give birth to their cubs inside the bottom of a vacant tree. These cubs are born blind and they do not immediately crawl or develop hair. They are also vulnerable after the birth and when given birth in pairs, their mother can cater for only one cub at a time for a period of 6 months until the cub is old enough to walk briskly. They are weaned when they are one year’s old and when they are 18 months old, they leave their mother to have their own territory. The giant panda’s lifespan ranges from 20 to 35 years.

Giant pandas have large and strong jaws with flat molars. They eat bamboos most of the time, as mentioned above. Their thick fur is creamy white in colour with distinctive large black patches. They are medium to large in size with large heads, small eyes and short tails.