The Bulgarian Shepherd Dog, as suggested by its name, is a dog originating in Bulgaria. It is popularly known as Karakachan or sometimes called Thracian Mollos. It was primarily bred to guard livestock by the nomadic shepherds living in the mountain regions. The breed is one of the oldest surviving, preserved mainly due to the conservative breeding practices of the shepherds. Its ancestry is predicted to run up to third millennium B.C. It has been officially recognized as one of the old native breeds of Bulgaria.

They are a working class of dogs typically employed for flock and livestock herding and protection. Besides they are also employed as guarding dogs and some even serviced as watchdogs in the Bulgarian army. They are extremely loyal to the owners and will go to all lengths to protect them from harm. With numerous examples of their bravery, they are considered one of the best livestock guarding dogs (LGD).

The Bulgarian Shepherd Dog is quite big and in its natural working environment may be in the field for almost whole day. The dog hence has a high metabolism and will require food at least four times a day. Good quality of dog food should be provided to make sure that the dog is healthy and its coat is shiny. 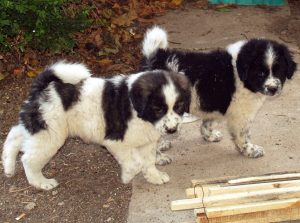 The Bulgarian Shepherd belongs to working class of dogs. The dog needs to occupy itself with some form of work as a first nature. Brought up with the sole purpose of tending to and herding livestock, these dogs are happiest in their natural environment – the farm. They traditionally belong to the mountainous areas and hence prefer cool climate, and so does their thick coat. These dogs do not do well in apartments and at least require a medium sized yard to roam about. Even most of the breeders prefer that their Bulgarian Shepherd puppies, being adopted, get to live on a farm or someplace where the dogs will be occupied with work.

The Bulgarian Shepherds require a very active and busy lifestyle. These dogs are meant to be workaholics and require an extremely active routine. Though ideally suited to farm life, if these dogs are being brought up in an urban environment, it must be ensured that the dog is getting required physical stimulus. A couple of hours devoted to exercise every day is necessary. Fitness freaks and active people may take them on hikes and trails.

The Bulgarian Shepherd dog’s primary instincts are protection. It is extremely territorial, the flock being its center point. The dogs do not attack unless they see a threat looming upon their territory i.e. the flock or their owners. The dogs are very large in size and pack a bite. They are passive against nonthreatening humans. When facing a predator, they will chase the predator off their territory but will never venture too far away from it. They bond pretty well with animals, especially if brought up together, and do not threaten them. 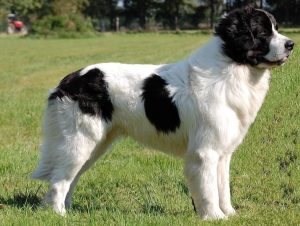 Being one of the few surviving primitive breeds, the breeding of the Bulgarian Shepherd Dog or the Karakachan is strictly scrutinized by breeders. There are various mixes of the Bulgarian Shepherd crossed with other breeds but they are not recognized. The purest of these are registered in International Karakachan Data Base maintained in Bulgaria. They are purebreds and a typical litter consists of 6 to 10 puppies.

Large and muscular, the Bulgarian Shepherd can be quite intimidating to look at. The skull, conforming with the rest of the dog’s stature, is broad and bulky with a massive muzzle and a large pigmented nose. The eyes are deep and hazel or dark colored radiating confidence and the ears are small. The body and the legs are massive and muscular highlighting the power of the dog. The dog’s coat in head region and in front is short and on rest of body is long. Its black or white colored with spots of contrasting or brown color. The male and female have distinct features with the female having a less pronounced body frame than males.

The life expectancy of the Bulgarian Shepherd Dog is estimated to be between 12 to 14 years. They can have an active work life spanning from 7 to 10 years.

The Bulgarian Shepherd dog is one of the rarest primitive breed surviving on the earth today. These have been bred conservatively since ages. These are one of the most stubborn and healthy dogs on earth. They can adapt to a variety of living conditions no matter how harsh they are.  Genetic diseases are pretty rare in these dogs, though the cause for the same may be lack of research or their non-documentation. The thick coat of the dogs may be prone to fleas and must be kept clean.

The dog being primarily a working dog and suited for a farm environment does not requires professional grooming. The coat must be brushed at least a couple of times a week to keep it tidy. Bathing one in a while is more than enough. 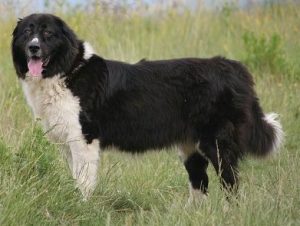 The Bulgarian Shepherd dogs shed heavily especially when the seasons change. Due to heavy and thick coats, they can make an area laden with their hairs. Brushing is required daily when these dogs are shedding

The Bulgarian Shepherd dog was assigned the responsibility of guarding the livestock and by instincts is fiercely protective of its flock as well as human companions. The dog is brave and may take on large predators on its own if it senses danger. At the same time the dog is extremely loyal to its family and is friendly and tolerant towards children. They might be aloof around strangers and warn the owners of their presence and may even become aggressive if the stranger ventures into the dog’s territory. If brought up in urban environment, the dog must be socialized from an early age. Still it should never be left unsupervised. They may try to dominate other dogs but they generally bond well to animals in the household.