The Boerboel breed is a large and muscular breed of dogs that are originated from South Africa. Because of its origin, it is also called South African Mastiff. The actual historic owners of the boerboel claim that these are the only breed in the whole world that is especially bred for the purpose of guardianship and protection. This claim, however, has been highly controversial over the period of time.

They descend from Boer Dogs, which is why they are large and powerful. The term Boerboel refers to farmer’s dog that takes us to its original functions of guarding and protecting its owner’s family that was mainly the farmers. However, this breed is very territorial and would remain very suspicious of strangers. They are massive in size and are categorizes as intelligent breed.

The country of origin of Boerboel is South Africa.

The male and female Boerboel look very masculine and feminine respectively.  The exact measurements are given below:

Borboels come in varying shades and colors that commonly include coats of red, different shades of brown and fawn colors. Small patches of white color may also appear on the chest and legs. However, owners of this breed prefer their Boerboels to have a full clack mask on the face. Other styles are shades may include brindle and piebald or also Irish marked.

The coats of Boerboels are typically short and smooth. They appear to be really shiny and dense. There is not really wrinkly but can appear to be a little loose.

The average lifespan of Boerboels is about 10 years.

Boerboels are massive dogs appearing very large and muscular in size. They have a broad and square-shape of skull. Thye are popular for their physical strength. They are not tall but are longer in looks. If seen from the side views, a typical Boerboel would appear to have his elbows reaching the lower area of their chest.

They are very buoyant in movement, which is also because of the right proportion of each part of its body. It has very well filled cheeks and so it may appear to be chubby. A good breed should have its face area symmetrically blend with its upper head area. Its muzzle is colored dar and is usually black and has huge nostrils. Its nasal bone should be measured as long as 10 cm at max. Since Boerboels have a big and loosely appearing upper lip, it covers the lower part of the lip. They have strong and broad jaws but have medium-sized ears that should ideally be well-proportioned with the head.

The back of the Boerboels should be straight and in good proportion with the muscles on the back. They also have muscular chest that are developed properly. Their back and front paws are slightly different in a way that the former is smaller than the latter.

Boerboels are not recommended to be kept in an apartment setting. Since they are big, stong and muscular, they need a large fenced area to roam around and play. They are good even when kept outdoors but they should not be left on their own when running because they do not do really well with strangers.

The name Boerboel has been derived from the South African word boer for farmers and thus, it literally translates itself to a farmer’s dog. Though the breed has a long history, however, it is still not certain how many dogs it has been bred from. Soemof the facts that could have been gathered reveal that it was brought by Jan van Riebeeck to the Cape, the breed that was big and long and had a Mastiff appearance.

Later, in the early 19th century when British settlers arrived, they brought with them Bulldog type and Mastiff type of dogs. Theories also suggest that they had later imported some other breed of similar dogs from Hottentots that assisted in the development of Boerboels.

Boerboels are generally very healthy but they are heard to develop hereditary problems and disorders. This includes bloating caused by gastric troubles and volvulus, entropion, ectropion, hip and elbow dysplasia.

Since Boerboels have short hair, their shedding is not a huge concern. They can be kept neat and clean by brushing once in a week so any dead hair would be removed. They should only be batched when they are smelly and dirty, they are not the breed to be bathed frequently because it will make their skin very dry.

Moreover, their teeth should be brushed regularly because they are prone to develop tartars. The trimming of their nails should begin from their early puppyhood because once they grow up to be giant enormous animals; they won’t get used to this activity and will then not obey.

Boerboels should be given a lot of time to exercise and play and thus as mentioned above, should be kept in fenced yard where they can run. It also should be taken for a long walk every day and they are very responsive when they are made to play with balls. 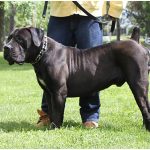 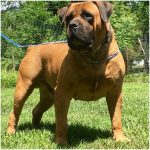 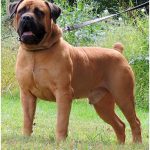 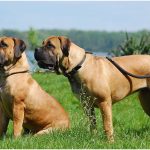 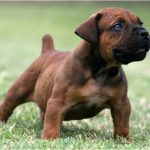 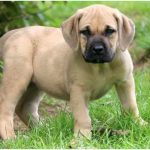 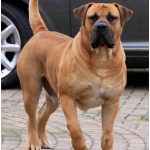 Boerboels are very obedient and intelligent breed of dogs. They are fearless and thus, turn out to be really great watch dogs. They are also very loving towards their family and would always want to play fetching the ball with their owners.

Moreover, Boerboels are very affectionate and loving with kids. They may also have them ride on their backs and would crave for their attention. They also behave well with other animals including dogs, cats and also birds. Their guarding instincts are really great and they would protect the family and property of their owners with their lives.

Once they are introduced to strangers and guests, they will start being playful with them too. However, since they are intelligent dogs, their owners have to have a dominant personality to make them obey their commands.