Originally called Braque de l’Ariège in France, the Ariege Pointer is a French Hunting Dog with high adaptability and intelligence used to assist in hunting. It is seldom bred as a pet.

The Ariege Pointer originated from Ariege, France; hence it has this name. They were bred as early as mid-1800s. During the World War II, many of them perished and the breed almost went into extinction. In the 90s, a group of French breeders dedicated themselves to the survival of the breed and popularised it as a part of the French hunting legacy in a bid to increase its population. After 20 years, it seems that their efforts have been successful, though only for the time being. Nowadays, Ariege Pointers are used mainly as a hunting dog. However, it is still relatively unknown outside of France.

Ariege Pointer’s require less food as they age. For pups below 12 weeks, 4 bowls of food per day is recommended. When they become 3 months old, they can be fed 3 meals per day till they reach 6 months, when the food intake can be reduced to 2 meals per day. For the younger ones, only high quality and branded puppy food is acceptable. Once they have aged a year, one meal a day is enough and canned food and broth can be mixed into their diet. Cooked eggs, cottage cheese, fruit and vegetables are also allowed but should take up no more than ten percent of its daily nutrition. Clean drinking water should be readily available at all times and it is not recommended to give them anything other than water to drink.

Ariege Pointers are very active creatures and it is unwise to keep them in a small apartment. Without sufficient space for them to exhaust their energy, they may become unpredictably destructive and wilful. They must be kept in houses with a large yard for them to run about freely. A dog bed with bedding will be needed and they should not be made to sleep on the floor.

They are generally lively and friendly; however, they are wary of strangers as they are more independent and require routine training. While this dog possesses a high sense of alertness, it also tends to be too good-natured to be used as a proper watchdog. They are quite docile and are usually obedient towards their owners, especially with regular training. Though they co-exist well with other dogs, they are known to injure non-canine pets and are not recommended to be kept in homes where there are smaller animals.

Ariege Pointers should be trained as young as possible, as they are independent creatures and require consistent training. Owners should ensure that they are trained to respond accordingly when beckoned for and they should be leashed at all times when they are brought out. Lesson times should be brief and entertaining as they have a short memory span. They are relatively easy to train, as long as training is regularly done. As they respond only to the “carrot” approach, do shower them with treats as well as verbal affirmation when they behave. The “stick” approach will only make them resentful and defiant, so do not hit them or yell at them.

They require regular intensive exercise, as they are a very energetic breed. At least an hour’s of walk daily and a good, long run occasionally are needed for them to release the excessive energy they have. They should also be utilised for their hunting skills once in awhile, lest they become destructive and hyperactive.

The females give birth to about 4 – 8 puppies at once.

It is a breed with ordinary proportions, drop ears and a docked tail. Their coat is glossy, short and white with specks of orange or brown patches. The hair on their head and ears tend to be more polished and fine as compared to the rest of their body. The colour of the coat determines their nose colour, either pink or light brown, as well as their eye colour, brown to light amber. They stand at 56-67cm and weigh about 25-30kg. They should stand tall without looking excessively heavy.

This breed is more prone to health issues, such as canine hip dysplasia, elbow dysplasia, cleft lip, demodex mange, ear infections, deafness, epilepsy, progressive retinal atrophy and aortic stenosis. Go for regular check-ups at the vet and do make sure all medication is prescribed by a certified professional. If your dog has bad breath, do not brush it off as it may be an indication of a more serious illness. An Ariege Pointer pup should be vaccinated with a combination immunization once every 2, 3 and 4 months. 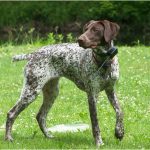 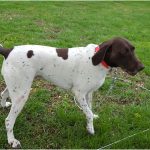 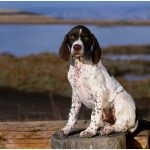 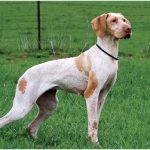 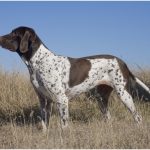 This breed requires generally low maintenance and only requires regular brushing of its coat. Due to their floppy ears, things like grime, food and other particle may get stuck in it. As such, their ears should be cleaned regularly or it may get infected. Though they only require a bath a couple of times a year, they should be checked daily for fleas or ticks during warm weather.

It would be best if their owner is a hunter; otherwise, they require at least one owner who is very active and enjoy being outdoors. This is needed to ensure the dogs get the proper exercise and also for them to release their energy.