The tales surrounding these creatures often instill fear. There are many myths and misconceptions popularized by movies like ‘Anaconda’ that may be misleading regarding the lives of these creatures. Although they are not harmful to humans, they do have the ability to strike when provoked. Below is a detailed description of anaconda.

Anacondas are generalists in their feeding habits e.g. they eat what they find. They mostly feed on aquatic creatures as they spend most of their time in the water. It isn’t uncommon though to hear stories of anacondas eating a goat after wandering too close to a water body infested with anacondas. They kill their victims by wrapping themselves around their victims. Contrary to what people believe, they don’t crush their victims; they suffocate them. Every time their victim exhales, the wrap themselves a little tighter until the exhaling stops. Sometimes, this may break their victim’s spine.

Anaconda is a semi-aquatic creature. Although they can move through lands (mostly covered in vegetation) and supposedly climb trees, their movements tend to be slow. It is only natural that they prefer living in water where the weight has little effect on the speed of their movement. They thrive in shallow waters, slow moving rivers, flooded forest floors/ savanna grasslands, and swamps. You’ll rarely find them in deep waters or water covered in thick vegetation. The Llanos Grasslands of Colombia and Venezuela and the Amazon Basin are examples of where the anaconda can be found. All known Anacondas have been found in South America.

They are diurnal creatures but are most active at dusk during hot seasons and at night. They are mostly found near water bodies where they escape to if disturbed. They huddle together in whatever water body is left during the dry season to avoid their skin drying up. They are afraid of humans and slither away on contact. However, when cornered, they can become very aggressive and attack by biting. Their bites may not be non-venomous but will often be very painful because of their large fangs and the surprising force they’ll use to bite you. 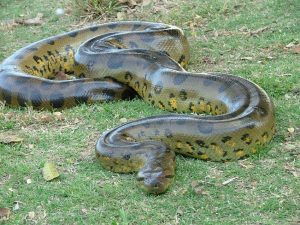 The gestation period for anacondas is usually 7 months. Their offspring can live on their own as soon as they are born. They are usually about 1% their mother’s mass when they are born but grow rapidly to gain a lot of mass into adulthood. Males will attain sexual maturity in 18 months while females will get to maturity in three years.

Fully grown anacondas have little to worry about regarding their safety. Young anacondas, though, have been known to fall prey to other aquatic creatures, like piranhas or land mammals like the jaguar. Their main concern would probably be humans. Their size can be a bit intimidating. It isn’t uncommon for communities living near anaconda-rich regions to attack them for no other reason than fear. Another breed of humans is eager to catch them for their skin.

Exceptionally long and undamaged anaconda skin can fetch a significant sum from the leather industry. The biggest challenge facing their existence is deforestation. Areas like the Amazon Basin have been cleared for logs and Mineral and oil exploration by huge corporations. Land grabbing for cattle ranching and agriculture has also led to a significant decrease in the size of the vegetation in such regions. This destroys the Anacondas natural habitat and in turn strains their reproduction rate and survival.

Mating season for the anaconda lasts for months and usually happens in the dry season. The female releases pheromones for the males to trace and find her. Multiple males wrap up around the female to form a breeding ball. A single female may find herself wrapped up in several males competing for the chance to mate with her. The males ‘wrestle’ each other to get the opportunity to mate with the female. This process may take up to four weeks.

The rubbing together in this ball arouses the female causing her cloacal region. The winner usually is the first male to find the female in the ball or the one that manages to wrestle the other males out. The females are ovoviviparous. Ovoviviparous creatures lay eggs that hatch inside the body of the female. The snakes are ‘pregnant’ for about seven months before the eggs hatch in the female’s body.

Green anacondas are green, though there are some variations, including greenish-brown, greenish-gray and olive green. The actual length of anacondas is hard to estimate as field workers often exaggerate the length they see. Those who manage to catch one have some fear, making it difficult to correctly measure in the same way you’d measure the back of a dog or cow. These creatures are strong and will likely wiggle about messing up the whole process. It is believed that they cannot grow beyond 6 meters. There have been unclaimed awards put in place for people who can capture one of a length beyond that.

They have scaly skin and their weight isn’t known either. Some have been found with as much as 250kg, but their average is about 180kg. Yellow anacondas have a yellow golden tan skin with dark blotches and different patterns. They are usually about 2- meters long. Bolivian anacondas are similar in color to the green anacondas. The dark-spotted anacondas have large spots on a brown skin can grow to a length of about 3 meters. Little is known about the dark spotted anacondas, the yellow anaconda, and the Bolivian anaconda. 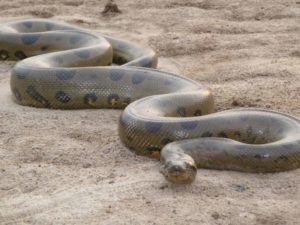 A common disease that affects the anaconda population is stomatitis or Mouth rot. It is usually a bodily response to unfavorable temperature in the environment, overcrowding, parasites and poor nutrition. This disease may manifest itself in the form of swelling, oral discharge and a decrease in the frequency of tongue flicking. In the wild, Anacondas often succumb to such sickness, but in captivity, they can survive with the help of administered antibiotics.

Anacondas do not have any pores, hair and hair follicles. There are nearly no surfaces for any substances to stick on. As they crawl on surfaces, any elements just fall off. Before sleeping, these snakes perform a ‘routine’ of crawling all over their body before settling in a comfortably coiled position.

Shedding skin is normal in animals, even in humans albeit slowly and continuously. Snake shedding is impressive because it happens all at once. One of the main reasons for shedding is to allow further growth. After a certain point, a snake’s skin cannot grow any further. A growing snake will then have to shed its skin for this growth to take place. This is why young snakes shed their skin more often than adults. Their growth rate is high during their youth but decreases as they become older. Another reason for shedding is to get rid of parasites that have attached themselves to the old skin. This is important because some of these parasites may lead to diseases like Stomatitis, as mentioned earlier. Damaged scales, incomplete shedding, and pregnancy may trigger a process referred to as rapid shedding cycle in adult anacondas. Here a shedding cycle begins almost immediately after another one is completed.