Bisons are thought to be distant relatives of water buffaloes. Their native habitat is the wild areas of North America, where they are known to have existed right across the stretch of the continent, from Canada down to Mexico. However, these wild bisons have been hunted by humans for their skin and meat and they have also been hunted out of recreation and fun. This has led to a large decline in the number of bisons in North America and today, the species is classified as a threatened species.

The Bison is a large, wild breed of cows that is found in North America. One of the largest types of cows in the world, a bison inhabits both the cold weather as well as the warm climates of North America. It is also considered to be the largest land mammal in North America. Bisons are herbivores that typically feed on grass and live in herds in grass plains and forests.

In the US, free moving bisons are not looked well upon. Any herd of bisons that live on private land need to be fenced. In some states such as Montana, free ranging bisons may even be shot at. This is done on the grounds of damage to public property and the spreading of infections.

The primary food source for bisons is grass, which proves to be quite abundant in their natural habitat. Bisons also feed on berries, acorns and other small fruits. Bisons are known to be better at browsing than ordinary cattle and depending on the climatic conditions bisons may even resort to eating small shrubbery, small twigs and will also forage under any snow looking for grass underneath.

Bisons are known to live in plains, prairies and river valleys. They also thrive on semi-open and open grasslands, scrublands, semiarid lands and sagebrush.

Bisons are apparently peaceful and lazy animals, but their behavior remains largely unpredictable and is not completely understood.

Bisons are large herbivores which generally appear to be sluggish, lazy and peaceful. However, their temperament proves to be rather unpredictable. Bisons may attack anything or anybody without any apparent warning or reason. Bisons generally stay together in herds and engage in an activity known as wallowing, wherein groups of bisons roll together in depressions in the mud. In their natural habitat, bisons move around at a slow and sluggish pace, except when they are wallowing about. They are large and can prove to be very unpredictable in their actions.

Between the ages of 2 – 3 years, female Bisons are ready to mate. However, this is not the situation with their male counterparts who qualify to mate only when they attain the age of six. Their mating season runs from July to September and during this period, the male Bison selects his female mate from the female camp and tends it. Tending is a process whereby, male Bisons stay between their female mate and the rest of the herd and it lasts for some minutes or even days. After mating occurs, gestation of nine months also occur aand thereafter, the female Bison give birth to one calf at an isolated place.

Newly born Bisons usually appear reddish brown and it stays isolsted from the herd of bison with its mother. Development of horns and shoulder bumps occur after two months and thereafter at the age of seven months, weaning commences and the young Bison can live with its mother till it is one year old. In their wild form, they can live for 15 – 20 years depending on several factors.

The only natural predators of a bison other than humans include cougars, bears and wolves.

Before breeding Bisons, ensure you have the following :

Since Bisons are known to possess bad temper, it is important to hire a trained animal breeder to handle them effectively.

Bisons are considered to be the largest cows in the world and they tower at over 2 meters tall. They have thick hair and overall, the mammals appear to be wild and sluggish in appearance. A full sized bison may range anything in between 2 to 2.7 m in height. The weight of a bison may lie in between 1000 to 1300 kg.

Depending on whether the bison inhabits a colder or a warmer climate, the coat hairs are long and shaggy or coarse and short respectively. Typically, the color of the coat of a bison is tan or brown. Bisons are the largest cows in the world. They have a strong, sturdy and muscular body and they have very few natural predators thanks to their sheer size. Some of the distinctive body features exhibited by a bison include a large shoulder hump and a huge head.

Typically, the life span of a bison ranges in between 15 – 20 years.

Bisons are large, strong and healthy animals. Because of their sheer size, bisons have few natural predators and man proves to be the biggest predator of the species. One of the main health problems that the American bison faces is a condition known as malignant catarrhal fever. Bisons are also prone to a number of infections from parasites, bacterial and viral infections and any bisons on private lands will need to be vaccinated and inoculated on a frequent basis to prevent any chances of spreading of an infection. Foot and mouth diseases are also known to be common in the American bison.

In its natural habitat, a bison usually stays in a herd and the herd takes care of itself. These herds, which were once abundant across North America, are now only spotted in small clusters, spread out across the remote grasslands and some of the forest areas of the continent. Bisons are generally strong and healthy creatures, but due to incessant hunting by humans, their population has rapidly declined from a hundred million to a few thousand. Today, the species is classified as a threatened species.

During spring, Bisons shed their hair which they groom with their long tongue. 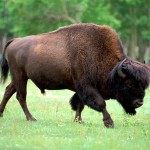 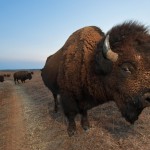 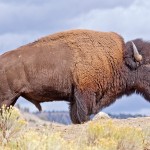 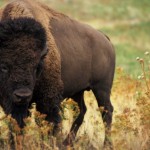 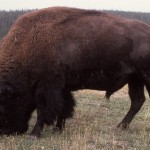 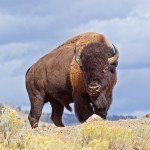 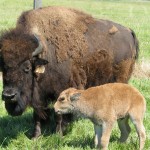 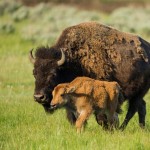 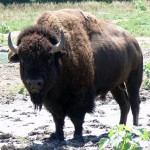 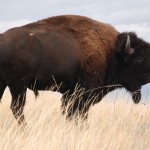