The Binturong is an exotic species which is indigenous to the dense tropical jungles of South East Asia. Although they were earlier in abundance, their numbers have started declining and they are classified as a vulnerable species today. The Binturong is a large, exotic carnivore, which is almost a meter tall, slow, heavy and sluggish in appearance.

They have a thick and coarse coat of fur and resemble other civets such as mongooses. Also known as a bearcat, there are over nine different types of the species which are all alike in appearance, but vary in terms of their height and weight. Despite being carnivores, Binturongs primarily eat fruits and are good at climbing trees. However, they also hunt small rodents, birds and some insects at night time.

The increasing use of Binturongs as pets, attractions in zoos and its use as food and medicine have led to a decline in the population of the species. It is now classified as a vulnerable or threatened species and there has also been a significant amount of damage done to its natural habitat in South East Asia.

Binturongs, despite being carnivorous animals, eat fruits as a primary diet. They go about hunting for prey in their natural habitat, often consisting of small rodents, birds and insects. It is recommended to offer a binturong as natural a diet as possible, allowing it to pluck its own fruit or stalk its own insects.

Bints were natively located around Laos, Thailand, China, Philippines, Indonesia, Borneo island, India and Cambodia. However, it is important to know that despite the large number of Bints recorded in these areas, they population has drastically reduced over the years. Currently, Binturongs are very difficult to spot due to their huge population loss and they belong to vulnerable species on the brink of extinction.

They are mostly found in dense jungles that are located near slow-moving water bodies. Due to habitat loss in most Southern parts of its natural habitat, the population of Bints has drastically reduced.In areas without high cases of deforestation, Bints have been affected mostly by hunting carried out by the ever-increasing human population. Interestingly, Bints thrive on thick and dense forests with cover on the ground and on trees. With massive deforestation, Bints have fewer places to go.

A Binturong is a carnivorous animal that typically belongs to the tropical jungles. While they are not aggressive in nature, they have the instincts of being a carnivore and can prove to cause harm to humans. However, they can enjoy time with humans, given there is not too much chaos around. Binturongs are tropical animals and they do not do well in cold climates. In fact, the natural habitat of a Binturong is that of a warm and moist tropical jungle and if these conditions are not met, the animal may prove to regress and go into withdrawal, spending most of the time sleeping.

Binturongs, despite being carnivores, are mostly gentle in nature. They survive on a fruit diet and only sometimes resort to eating animals and birds. They are somewhat solitary animals and prefer being away from other animals. In fact, a Binturong is highly agoraphobic and also dislikes wide and open spaces. It sticks to walls and canopies whenever it is presented with the option of doing so. Often spotted in zoos and in recreational centers, Binturongs can enjoy playful moments and quiet time on their own, given that there is not too much chaos or confusion going on around them.

There is no specified mating season for Binturongs but there are higher incidences of mating between February and April and also July and November.Their gestation period lasts for 3 months and before that, female Bints come to nest in thick vegetations that are outside the reach of predators and natural elements.

Female Bints are capable of producing between 1 and 3 cubs at once. These cubs measure exactly as human fists. They are blind and deaf at birth with full dependence on their mothers for milk. At the age of 2 months, they are weaned and they attain the status of adulthood after one year. In their wild form, they live between 10 and 15 years but when they are in captivity, they tend to live longer. Bints can live for 25 years under captivity.

Humans are the primary predators of Bints. They go directly to their habitats and hunt Bints. They are credited for the massive depletion in the population of Bints around the world.

In captivity, Bints are mostly found in zoos. Zoos and games reserves are the best places you can breed Bints because a similar dense tropical habitat can be obtained there. However, they are well known for their high degree of intelligence and curiosity. Also, their temperament makes them difficult pets and you are advised not to train them at home unless you are a trained wildlife handler.

The Binturong is an exotic, large and bulky animal, which resembles a mongoose or the civet family of carnivores. It is heavy and sluggish in its movements and has round and brown eyes, with long white whiskers on the cheeks. The fur of the Binturong is coarse and it also uses its tail for stabilizing itself. An adult Binturong rages from 60 – 96 cm in length. The weight of a Binturong may lie in between 10 – 14 kg.

The binturong has long hairs in its coat, which gives off the appearance of shaggy and coarse fur. The color of the coat may vary from black to dark brown in color and is often streaked with grey. Tufts of straight and long hair also protrude out of the top of the ears. The Binturong is a bulky, large and rather heavy animal. It is sluggish and slow moving, but is excellent at climbing trees. It is also a carnivore and despite slow speeds, it can efficiently hunt smaller rodents, small birds and insects with ease.

Bints suffer from Canine distemper virus. Effects of this infection include:

It is caused by aparamyxovirus that resembles the virus that causes rinderpest and measles. It is spread through aerosol droplets by infected animals. You are therefore advised to prevent the occurrence of this disease on our bints by preventing it. This is because no treatment pattern has proved to be uniformly successful. Prevention of canine distemper virus is through vaccination.

Generally, Binturongs groom themselves by chewing, scratching, cleaning and licking themselves with their hind paws. As a breeder however, you are expected to brush their hairs occasionally and also whenever they shed their pelage to prevent skin diseases.

As with other animals that possess hair, binturongs shed their pelage periodically. However, whenever they fall sick they shed their pelage uncontrollably. Ensure that you brush off the shed pelage to prevent skin diseases. 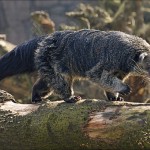 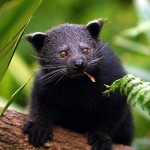 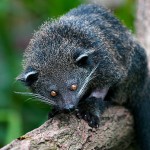 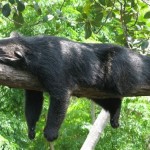 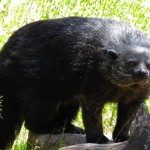 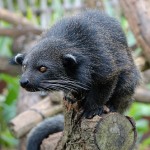 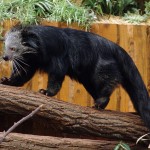 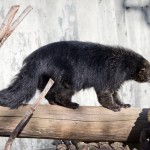 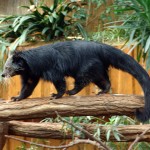 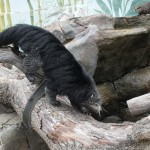 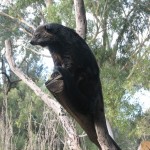