Moles are mammal species that live a hidden, underground lifestyle. They have round bodies, soft fur, tiny concealed ears and eyes, small hind limbs and strong forelimbs with huge paws that are fitted for digging underground. Due to the complicated tunnel systems made by them, they are popularly known as garden pests. They weigh about 70-120 grams according to the Mammal Society.

Facts and Information About Mole :

The major food of moles is earthworm and they like it so much that they eat about half of their bodyweight of earthworms everyday if available. Moles also eat larvae, small plants, grass roots, bulbs, seeds, vegetable crops and their roots. The diet of a mole also consists of centipedes, crickets, millipedes, beetles, snails, termites, grubs, sow bugs and ants. They constantly search for new prey that falls into the tunnels.

The breeding season of moles starts from March and ends in May. Male moles are popularly known as boar and female moles are known as sow. Female moles construct a bigger tunnel which is almost the size of a football and covers it with grass and leaves with a food store nearby. Moles have a gestation period of 30 days after which 3-8 young hairless moles are born. They start having fur once they turn 2 weeks old. After 3 weeks, they open their eyes. These young ones feed on mother’s milk to grow fast and leave the nest in about 30 days. Once mature, they move out of the tunnels to look for their own area and start digging their tunnels and burrows.

Moles are available in every continent except South America and Antarctica. They live in areas which have abundant of soil so that they can dig their burrows and tunnels. Grasslands, mixed woodlands, urban areas and sand dunes are mainly where moles are found. They stay away from mountainous areas and places that have acidic soil. Tunnels serve as underground roadways for moles where they build nesting chambers for giving birth to the young ones. They find food while digging the tunnels and save them for later. Most of the time, the whole life of a mole is spent in building a series of tunnels for the coming generations. They store earthworms in their chambers by ripping their heads off. These chambers are known as kitchens. The Mammal Society has found a chamber consisting 450 earthworms at a time. 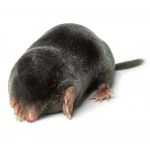 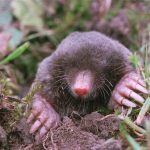 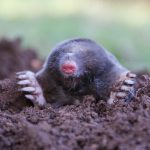 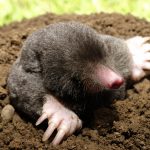 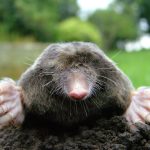 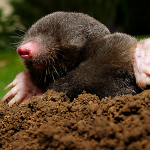 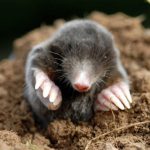 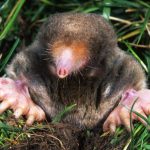 Moles become prey to snakes, owls and hawks when they come out at night from the tunnels in search of food, new territories and nesting material. They are slow on the surface due to their body structure. Due to the underground lifestyle, they impart a strong, pungent odor because of which they are inedible for many animals. However, coyotes and raccoons still eat them. Most of the young moles are killed during floods in the spring season. A mole’s life is about 4-6 years on average.