Better known as the ‘king of lizards,’ Komodo Dragon is said to be the largest existing lizard in the world today. According to history, the largest Komodo dragon was as long as 10.3 ft. and   weighed 166 kg, which was quite heavy when compared to the weight of a regular 70kg wild dragon. Komodo Dragons can run 20 km per hour and their technique for hunting preys deals more with power and stealth. They spend lots of hours on a spot waiting for some healthy, sizable and feeble animal to come their way, such as deer, boars, buffalos, goats, etc.

All About Komodo Dragons :

However, the first eggs of Komodo Dragons were hatched in 1992 outside the Indonesia National Zoo. Those hatched eggs led to the creation of over 50 Komodo offspring, which were spread all over the world in around 30 zoos. Currently, Komodo Dragons living in zoos are kept in an outdoor and enclosed environment at the back of the famous ‘Reptile Discovery Center’.

Komodo Dragons are mostly restricted to the Komodo Island and some other volcanic islands in Indonesia. They are also found in some tropical forests, but most of them live on islands, beaches and the top of ridges. They avoid heat by taking refuge in small burrows. Although the males are larger and bigger than females, morphological difference between males and females isn’t too obvious. However, there is a little difference that can be seen in how the scales are arranged in front of their ‘cloaca’. The sex of a Komodo is not only confusing to the researchers, but even the reptiles also find it difficult to determine the sex of one another.

They use their sense of smell as the major prey detector. They follow the smell of their preys just like a snake. They use their long, split tongues to taste the air and take them back into the mouth, and finally to the Jacobson’s organs. The reptile has a chemical analyzing feature that help smell any animal around it through recognizing the molecules in the air. The concentration level of the signals on each tip of the split tongue tells them the direction from which the prey is coming.

This recognition process as well as the ‘undulatory’ walk of the Komodos, where their heads swing from left to right, assists them in sensing the presence and direction of a prey as far as 4 km using the prey’s odor.

During the time of hunting when a Komodo is up to catching a prey, it first attacks the feet and then knock the prey down. If it is a small prey, it goes straight for the animal’s neck. What the Komodo Dragon does is it waits till the victim falls to the ground and finally tears it into pieces. Their muscles are very strong with powerful claws that can effectively rip preys apart. Also, their teeth are the most dangerous parts of them. They are quite large, serrated, curved and can tear any animal’s flesh. Once the Komodo feels its prey is stuck, it may reduce its vicious grip on the prey. Once its prey is severely injured, the dragon then gives the final strike on the belly. When the prey bleeds to death, the Komodo starts feeding on it.

Majority of the mating of Komodo Dragons happens during the months of May and August. During this period, dominating males get involved in a combat ritual to get a female. They use their tails to support their posture while they wrestle and try to get their opponent to the ground. This combat is sometimes bloody, the loser of the combat tends to run or remains motionless on the ground.

The winner of the combat then initiates the mating by curving his tongue on a female Komodo’s snout as well as her body. The temple and the midst of torso are very common areas for stimulation, which has to do with chemicals and tactile secretions via the glands on the skin. Before copulation, the male brings out a pair of ‘hemipenes’ from his ‘cloaca’ at the bottom of its tail. After that, the male crawls on the back of the female Komodo and inserts one of the hemipenes’, the position of the female’s tail determines which ‘hempenes’ would go into her cloaca. 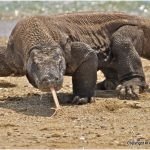 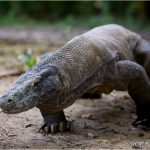 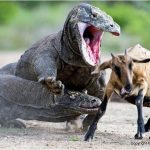 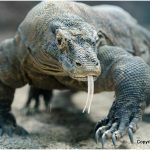 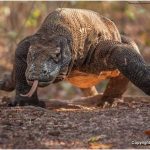 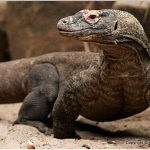 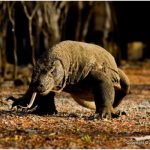 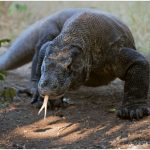 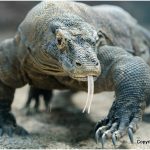 A female Komodo is said to lay about 30 eggs after the mating period. The delay in laying eggs could help the clutch survive the brutal hot months of the dry season. Moreover, unfertilized eggs could have a second opportunity for subsequent mating to come. The female lay in a dug on the sloped hills within the nests of some birds. These chicken-sized birds are land dwellers that make heaps of earth with twigs, which may reach 3 foot in height.  The eggs incubate for up to 9 months, and the females lie on the nests and protect their offspring. However, there are no existing evidence of the parent Komodo dragons taking care of the young ones.

Newborn Komodo dragons weigh lower than 100 grams and they are only 16 inches long. Their nursing years tend to be dangerous, as they sometimes become the victims of predators, including their own kind. They feed on a variety of insects, lizards, birds and snakes. If they live for 5 years, they can weigh about 25 kg and be as long as 6.5 feet. During this time, they begin hunting bigger bates, like rodents, goats, monkeys, wild boars, deer, etc. A Komodo dragon has a slow-growing process throughout its lifespan, which could be for over 30 years according to researchers.

Generally, Komodo dragons are reported to be endangered species due to their limited numbers. It seems like they have been hunted down either legally or illegally throughout the recent years, though it has not led to a complete eradication of this reptile species. However, strict laws have been established to help in the protection of the Komodo Dragons.