Belonging to the family Hyaenidae in the Carnivoran order, hyenas are a mammal species. They are found in Asia and Africa. There are four species of hyenas: Spotted hyenas, Striped hyenas, Aardwolf hyenas and Brown hyenas. It looks like they have evolved 26 million years ago. They bear resemblance with Banded Palm Civet. A detailed study of the dental structure and middle ear of hyenas has shown that civets are in fact a species evolved from hyenas. Being Africa’s most common large carnivore, hyenas are reputed for cowardice. However, at times, these animals can be dangerous and bold, attacking both humans and other animals.

What Do Hyenas Eat?

Hyenas are skillful hunters but they are also scavengers. Being more of an opportunistic feeder, they select the most attractive and easiest food and completely ignore fresh carrion and bones if there are any. Hyenas are known to consume animals of different sizes and origins. They are known to consume domestic stock and even other hyenas. They also feed on bones, carrion, other animals’ droppings and vegetable matters. They have powerful jaws. Their digestive tracts allow them to get nutrients from bones and skin. But they cannot fully digest horns, hair and hooves. These cause them to regurgitate in the form of pellets.

Since hyenas hunt during the nighttime and devour all the parts of their preys, too little evidence of their meals remains behind. Even though they eat many dry bones, they don’t need much water in order to survive. The main part of a hyena’s diet is meat and they consume lots of it. However, more often than not, hyenas prefer to consume the carcass of animals that were killed by another predator. They prefer the meat of zebras, jackals, porcupines, buffalos, antelopes, termites, foxes, monkeys and so on.

Where Do Hyenas Live?

How’s Their Behavior and Lifestyle?

Organized into territorial clans of individuals that are related, hyenas defend their homes against other clans that may be looking to intrude. Den is the center of each clan’s activity. Here, the individuals meet and the cubs are raised. Situated in the central area of the territory, hyenas’ dens are usually placed on high grounds. There are a series of underground tunnels that are connected to the high ground entrances.

Being social animals, hyenas communicate with each other through specific signals, postures and calls. They can quickly communicate with other members of the clan and outsiders as well. For example, when a hyena’s tail is straight, it means it wants to attack. If the tail is held up and forward over the back, it means the hyena is excited. Its tail hangs down if it is walking unbothered or simply standing. When frightened, it tucks the tail in between its legs. It keeps it flat against the belly and then it usually runs away.

After a 4 months gestation period, two young hyenas are usually born in a burrow. The fact that the gestation period lasts for so long results in cubs having incisors and canines, eyes open but unseeing and strong forelegs. Only a few hours after birth, siblings of the same sex start to fight for dominance. They use the neck bite and shake technique that the adult hyenas use. The cub that wins gets to keep the other from nursing until it dies. The youngsters depend entirely on milk for around 8 months. They are not entirely weaned until they are 12 to16 months old. They achieve complete maturation at 3 years of age. Their lifespan in captivity is as long as 35 years.

Who Are Hyenas’ Predators?

Since they are amongst the savviest carnivores around, hyenas are quite intimidating and strong. Therefore, they don’t have a wide assortment of predators. This doesn’t mean they are free of dangers. Their more powerful fellow carnivores, lions, are known to kill hyenas over prey. Besides the lions, hyenas are also often shot to death by humans at hunting games. Hyenas are not only hunted for their flesh, but also for medicinal purposes. 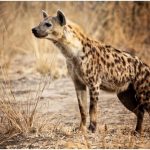 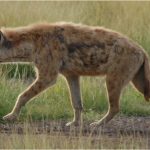 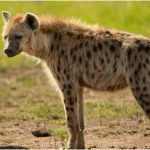 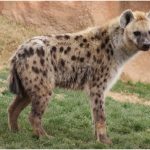 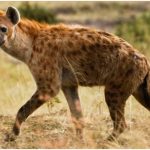 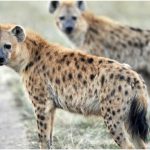 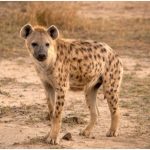 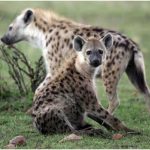 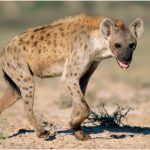 Being the largest of hyena species, male spotted hyenas weigh around 123 to 138 lbs. They have a height of 32 to 34 inches. The females weigh 147 to 165 lbs. at a height of 34 to 35 inches. Their build is sturdy with a ling neck and muscular long legs. Their head is massive and it has rounded ears with some robust teeth that are adapted to chewing bones. Hyena’s coat is rough and short with a reddish-brown color. The spots are round and black.

Being occasionally attacked by predators is not the only risk to hyenas. Another important danger to this species is habitat ruination. The presence of human beings in their natural habitat can contribute to lowering populations of hyenas. Also, livestock grazing and structural expansion drive away some favorite prey animals of hyenas. This, in turn, causes them to have less and less to eat. Although the population of spotted hyenas has decreased, the species is still not considered endangered.

Hyenas are known to have good hearing and sharp eyesight during the nighttime. They are very fast and they can run for long distances without getting tired. They work together effectively to isolate weak animals from their herds. Usually, they choose an animal that is ill or infirm, and pursue it until it is killed. They are vocal animals and make many sounds, including the “laughter” that has been associated with their name.