Crocodiles and alligators are popular animals, both characterized by tough and scaly skin. Crocodiles are olive green or gray green with long, thin snouts. They are widely known as the ugliest animal of their species and they are the most dangerous too. Even huge animals, like hippopotamus, never mess with them. They vary in size considerably and the kind of species determines where they live. There are about 23 species spread across Malaysia, India, Pakistan, United States, Africa and Australia.

Crocodiles live in the wild and thrive in regions that are highly warm since they can regulate their body temperature. When there is no water around they roll in mud to keep their bodies cool. They can stay for days without any drinking water. They can survive in rivers, lakes, lagoons, wetlands that are highly humid and even in pools of water that gather during the rainy season.

You may find it noteworthy that crocodiles can also survive in salt water because they have salt glands in their mouth. These glands enable them to absorb nutrients from water. They can survive in any area having water. Though they are solitary animals, they still share their pool of water with their species. It has been found that crocodiles make use of the same place or a recognizable well-known place to mate and lay eggs. That is the reason why they often show up on the doorstep at someone’s place in Florida. It is neither recommended nor safe to build homes at places which were once their habitats.

The diet of a crocodile consists of weaker species that include mammals, fish, birds, invertebrates and reptiles. They have an acidic stomach that can digest animal horns, pieces of bones and hooves with ease.

Newborn crocodiles are known to become the meal of predatory fish, birds, lizards and other animals that share the same habitat. There is only a 2% chance that a newborn crocodile will reach maturity, as it might even get eaten by its own species. Newborn crocodiles biggest concern is their own species that can feed on them when hungry. If their food is scarce, they feed on each other. A mother should be able to protect the newborns or other adult crocodiles will end up eating all of them. Crocodiles have to face sharks or elephants to survive that don’t eat them but kill them to protect their own offspring. 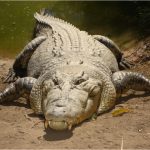 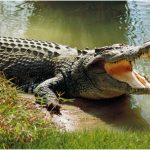 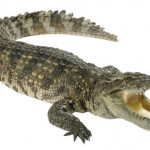 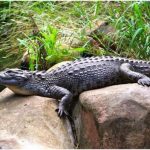 The mating season of crocodiles starts in July or August. They are 8-10 years of age when they start mating. Being aggressively territorial in nature, female crocodiles make sure there are no other crocodiles in theirs area to build a nest. Since female crocodiles are very choosy about their mating partner, male crocodiles have to show power and dominance over each other to attract the females. Female crocodiles are verbal about returning the affection that a male crocodile shows by rubbing themselves against the male. They mate for several days under water for producing offspring. The nests are dug by female crocodiles 10 feet under the ground and they make a burrow to keep their eggs in it for protecting them from falling prey to other animals.

The size, location and species determine the number of eggs that a crocodile would lay. It varies from 10 to 100 eggs, but only 20% result in an offspring. The time from conception to hatching takes about 80 days. However, sometimes it can also take about 100 days if the temperature is relatively cooler, as they need a warm climate to breed. Female crocodiles crack the egg shells with their mouth and transfer the offspring in water by keeping them in their mouth. The most interesting thing about crocodiles is that there are no chromosomes to determine their genes that decide males or females. The temperature of the breeding area helps determine the sex of a crocodile.

The greatest threats the crocodile species faces are illegal killing, loss of habitat, road kill and human development. Due to climate change, many coastal wetlands and habitats of crocodile are facing saltwater invasion.